Views : 137
Update time : 2021-09-18 15:04:54
The Jeep Wrangler 4xe will be the first fully North American electrified model of the brand and its new format was presented today in an international event that has taken place in streaming, a word that has become common in the journalistic vocabulary. The same as the Zero label of the DGT, which on paper, thanks to its more than 40 km of electric autonomy, should have, although things are not certain now.

This plug-in hybrid Wrangler has just been shown for the first time alongside the new Jeep Wagoneer. The first can be considered the evolution of the brand's most global and iconic car, although now its sales are based more on the Compass or the Renegade, depending on the markets. The second is, directly, its return to the segment of luxury and large SUVs. Now is the time to upgrade the lights to Jeep Wrangler led headlights for your off road usage. 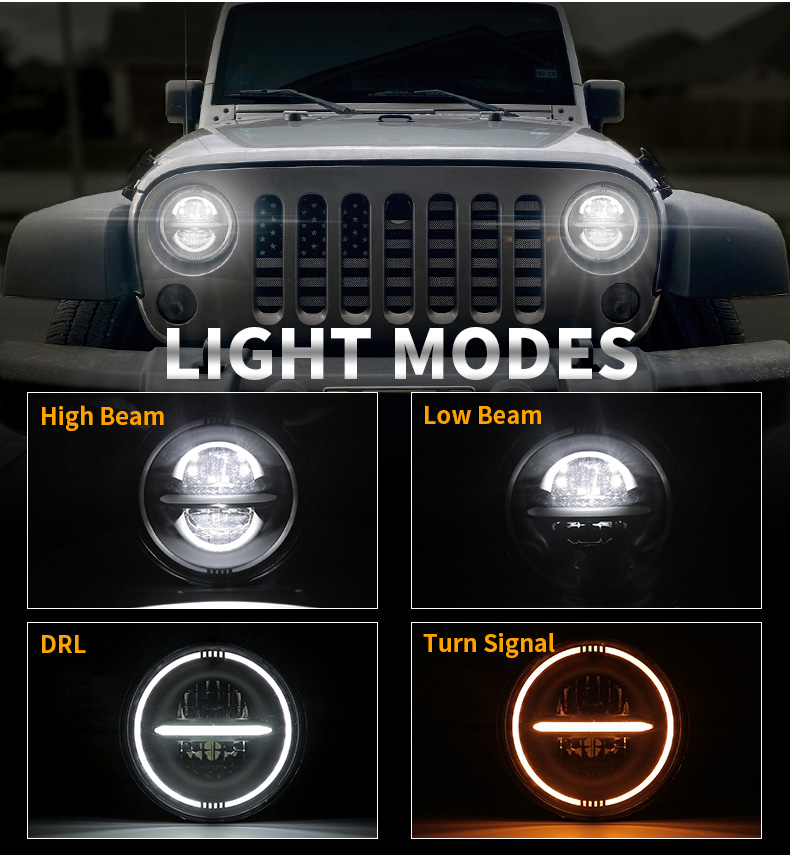 “Detroit is the city where the American spirit resides, the place where the passion to seek a better future and to do things well resides. That is why we have chosen this city to manufacture and present the model, an American icon that helped win World War II ”, Christian Meunier, global president of the Jeep brand, began by exaggerating the presentation of the new Wrangler 4xe.

“Jeep means SUV in the minds of many people, for me, it means my childhood, when we went to the Alps to spend the holidays. And for any Frenchman, he is the image of the American heroes who helped liberate our country, ”the executive continued.

Although not this Jeep Wrangler, other new models of the brand will be manufactured in the new Mac Avenue plant that is being built in Detroit and that symbolizes the commitment of the brand, according to Meunier, with the United States in general and, in particular, with the cradle of that country's motor. The new Jeep factory will create 6,500 jobs in the city of the country that suffers the most from the effect of depopulation.
The Jeep Wrangler 4xe, available from the beginning of 2021

The Wrangler 4xe is the piece of Jeep's electrification strategy in the US, "nobody can offer you peace of mind in a 4x4 format like Jeep, and now also in a sustainable format with plug-in traction in the Wangler," Meunier said. The new 4xe model, like its brothers the Compass and the Renegade plug-in, sustains its all-wheel drive on an electric motor, although the configuration in this case is somewhat different.

The new Jeep Wrangler 4xe will be the most powerful and capable off-road vehicle in model history, according to Jeep. With 375 hp and 637 Nm of torque, it will have an acceleration from 0 to 100 km / h in under 6 seconds. This is achieved thanks to the union of a 2.0-liter gasoline engine with a twin turbo and coupled to an electric motor that replaces the alternator, connected by a belt to the crankshaft pulley, supports with extra torque and, at the same time, generates electricity for batteries.

The lithium-ion battery pack is 400 volts, but its 17 kWh allows for relatively low recharge times. It is located under the rear seats, which can be raised to access this component and have their own heating and cooling system.

In its introductory note on the plug-in Wrangler, Jeep states that its drivers should not be afraid of batteries, as the model maintains its mythical wading capacity: 76 cm in the case of the 4xe. The electric charging port has a snap-open cover and is located on the front left of the hood to facilitate recharging.

On a charge, the purely electric range of the Jeep Wrangler 4xe will be more than 40 km, although with the change of the criteria for the DGT stickers it is in the air that here it will be a car with the Zero badge. In addition, the model offers electric traction also when driving as 4x4. "You do not need to make noise to be a legend," said the head of the brand.

As for the driving modes of the Jeep Wrangler 4xe, as with the Compass 4xe and the Renegade, there are three: e-save, Electric and hybrid, which is the one that always acts by default. The combustion engine is a two-liter turbo, but the model always saves some charge in its batteries to start the brand in electric mode and in case it needs an extra push from the all-wheel drive.
Previous : Do not Miss the Curiosities about the 2018 Jeep Wrangler Next : Chevrolet Camaro 3rd Generation 1982-1992
Morsun Brand
Categories
Information
Contact Us
Morsun 2012-2020 © All Rights Reserved.    POWERED BY UEESHOP
Email to Us Chat on Whatsapp
Chat on Wechat
Leave a message
Morsun Technology is one of the leading manufacturers of Jeep Wrangler led headlights in China.
More languages: Jeep Wrangler faros led | phares à led Jeep Wrangler | Jeep Wrangler führte Scheinwerfer | الصمام المصابيح الأمامية جيب رانجلر | Jeep Wrangler вёў фары | Faróis led Jeep Wrangler | Lampu depan Jeep Wrangler led