Land Rover Defender Does Not Forget the Fundamentals

Views : 81
Update time : 2020-07-16 16:19:44
After having walked its square outline on all terrains, battlefields and Champs Elysées for decades, the good old "Land" has left for a well-deserved retirement. The next generation arrives and the new Defender keeps the same recipe ... better?

Difficult to replace a historic monument such as the Defender. Originally released over 70 years ago and after having known everything, done everything, seen everything, it was finally overtaken by anti pollution standards, crash tests and other administrative groping. After 3 years of interruption and development of the new model, here is the replacement, which also bears the name of Defender.

To replace such an icon, Land Rover made the wise choice not to make a servile copy and paste of the original drawing. No New Beetle syndrome here, but a modern design, extremely inspired by the DC100 concept which dates back to… 2011! Yes, many details differ, but the drawing as a whole is not that new.

It is invariably a Land Rover, the grille and rectilinear forms attest, as do the discreet reminders of the old Defender: light signature in a circle, hood boss, vents on the same hood. It even keeps the opening of the rear trunk on the side, yet so impractical in everyday use.

Where it stands out clearly is in the design of the C-pillar, the quarter panel, hidden by an imposing, completely opaque square. What recognize it instantly in the crowd of SUVs, nice appreance of Land Rover Defender led headlights replacement, but also to attach various accessories such as waterproof compartments. The adventurer spirit remains present! 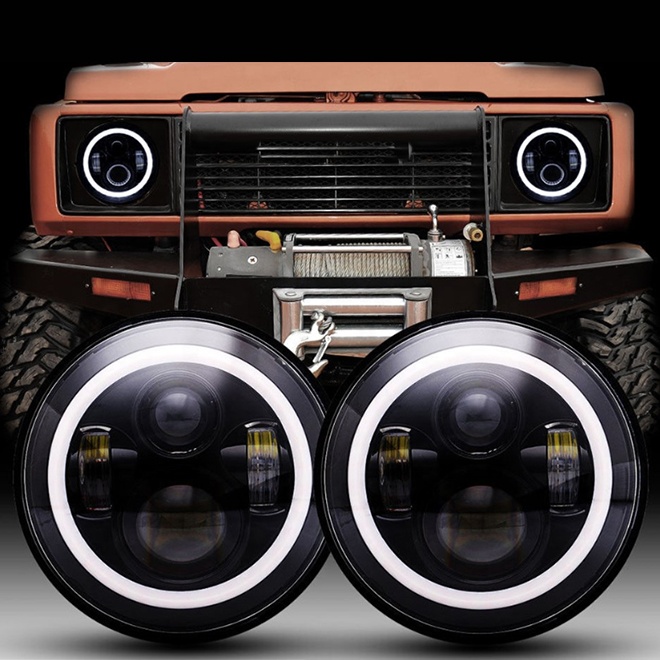 The Defender will exist at launch in 2 chassis lengths: 90 (2.59 cm wheelbase and 4.32 m length) and 110 (3.02 m and 4.76 m respectively). Enough to offer a 2-door version, which the competitor Mercedes G-Class no longer offers. A long chassis 130 will appear later. As we say in rugby: “the fundamentals first”, and the Defender does not ignore: very short front and rear overhang, ground clearance of 291 mm, approach angles of 38 °, angle of 40 ° exit and fording 90 cm deep. Hopefully these brilliant abilities are used for something other than climbing sidewalks.

The chassis adopts a new monocoque aluminum structure, far removed from the old separate chassis of the first Defender. There will be 5 engines at launch, again with a technological update: 4 2-liter diesel cylinders of 200 and 240 hp, 6-liter diesel 3 liters of 300 hp and in petrol we find a 4-cylinder of 2 liters and 300 hp as well as a 6-liter 3-liter 400 hp engine with light hybridization and 48 V system. Rechargeable hybrid versions will arrive later in the range.

At first glance, the interior is a revolution: digital instrumentation, touchscreen, wooden inserts, leather-trimmed seats, the move upmarket seems obvious. And yet, Land Rover has chosen to keep exposed screws, the possibility of washing the floor mats with a jet or ostentatiously exposing the structure of the dashboard. Simple effect of style can be, just to make "rustic", but it is nonetheless true that the Defender is not as opulent as the Range or even the Velar. The 110 can be arranged in configurations 5, 6 or even 7 places.
Previous : Jeep Wrangler 2011: Even Better Especially Inside Next : Advantages of the Jeep Wrangler Rubicon 2019
Morsun Brand
Categories
Information
Contact Us
Morsun 2012-2020 © All Rights Reserved.    POWERED BY UEESHOP
Email to Us Chat on Whatsapp
Chat on Wechat
Leave a message