As if I was watching you. After your good months maturing the idea – alone and with your partner – of buying a maxitrail, you finally lean towards the emblematic GS Adventure. You like its big shapes, its size, the power of its look and how well a BMW looks on you, but what if it turns out that 1250 is too many cubic centimeters? Well, it turns out that there is a GS that is big on the outside but a little more contained on the inside, and it's called the 850 Adventure.

We had the opportunity to thoroughly test it on one of the routes organized by the people of the Moto Club La Leyenda Continúa, which placed the "small" Adventure in a friendly and hostile environment at the same time. Friend because the high concentration of GSs in the same place made him find himself almost like a family, and hostile because precisely when he was surrounded by an expert public in GS, everyone was tempted to analyze it and scrutinize everything in detail.

Indeed, the "skin" of the eight and a half makes it look even more like its older sister, but what it hides inside is an engine with a broader range of potential customers and a more rational concept for many of the GS users. , including some of those who are already current owners of the 1200 or 1250.BMW F850 GS Adventure

The twin-cylinder engine – this one in line and not a boxer – offers us 95 CV that more than covers the needs of a high percentage of the GS population and, in addition, a torque of 92 Nm at 6,250 rpm that contributes to the sensations of a motorcycle larger and that its heights, dimensions and maxi-trail weight are really manageable.

All this also contributes to a very natural ergonomics that facilitates even the usual handling of foot in the off-road incursions that we do with it and the wide repertoire of electronics that the Adventure equips as standard, such as the ASC traction control - automatic control of stability – switchable for field use or «Road« driving modes, which intervenes on ABS and ASC for normal road use, or «Rain« mode, which adjusts both systems for wet driving.

The 850 that we took with us for the weekend equipped, in addition to the standard, the entire catalog of extras offered by BMW to allow us to get even more out of the experience. 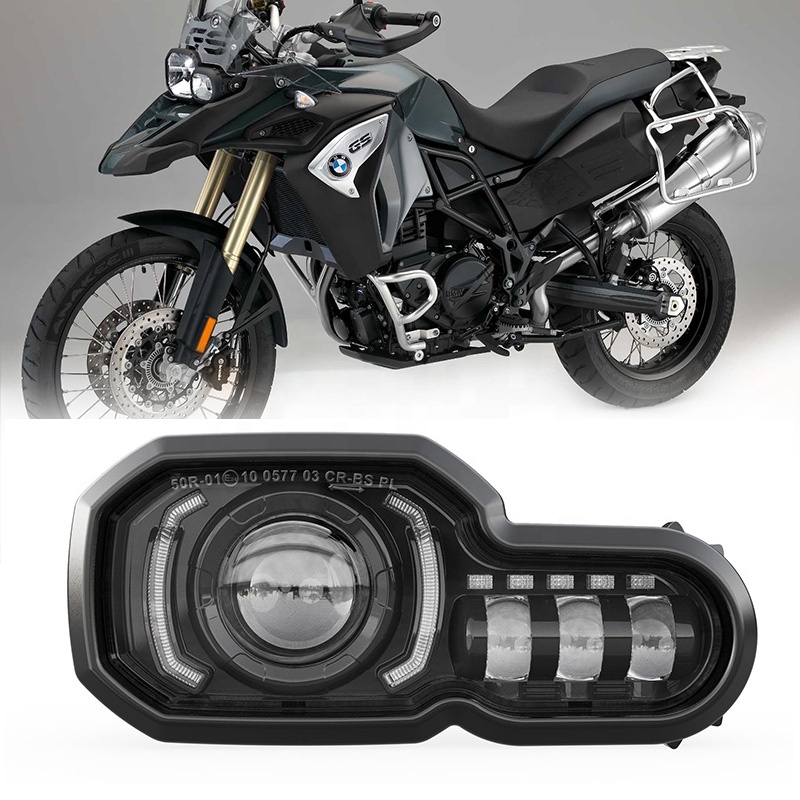 So, as it also came with the "Enduro" and "Dynamic" modes – in which the standard safety features change from ABS and ASC to ABS Pro and DTC – we took the opportunity to get out of the black and do some ground kilometers of on the way to the base camp of the concentration. Do you remember the lighting system of BMW F800GS led headlight? They don't fit for each other. The Enduro mode significantly softens the throttle response to deal with the exit of corners on gravel with great confidence, but if you want a less interventionist mode and enjoy a slightly more extreme use, you have Dynamic, which also deactivates the ABS to that not only the exits of the curve are more fun, but also the entries with the motorcycle crossed as far as your expertise allows you.

As a good trail-runner with a proven track record, overall the GS 850 Adventure performs phenomenally in almost any territory, with impeccable handling at high and low speeds.

To talk about the behavior of this GS in the city, it must be done in two sections: with and without suitcases. The image of the Adventure is closely linked to its resistant aluminum side appendages, but forget about them to move comfortably between cars. Without them, like any trail, it benefits from the height of the handlebar that is above the damn car mirrors, from a wide angle of rotation and from a very manageable engine both at medium and low speeds.

The other natural territory of the Adventure. It is a traveler with all the letters and is made to devour kilometers of asphalt both on the twisted roads of a mountain pass –even with the suitcases and top case fully loaded– and on the highway, where it has speed, driving position and comfort. enough to go to the North Cape in one go although, if you go fast, the protection of your screen may be insufficient.
On field

It is an Adventure and has Enduro and Dynamic mode as an extra. Translation, this GS 850 likes the countryside. It has ergonomics that are very suitable for off-roading and a very effective and versatile suspension for the obstacles of the usual paths – beware, with its limitations. In addition, the driving position is authentic trail and comes standard with details such as the serrated footpegs, grip protector, engine guard and height-adjustable rear brake and clutch levers, all of which are elements that directly connect it with its Dakarian conception. original. Of course, as long as you go with country tires, if not, it is better to reserve the country excursion for another day.

The GS 850, compared to the larger displacement maxi-trails, is a more logical bike. A separate issue is whether the choice of motorcycle is always logical, but the truth is that compared to the 1250 it offers a wider range of use in which both the most experienced and those who are not yet so comfortable will find themselves comfortable.

With this displacement, at first, what you find is a more playful use in which you have to speed up the gears more, taking its possibilities a little more to the limit and feeling that you have an engine between your legs that you can get more out of . The sound of the standard exhaust already contributes to enhancing these sensations, which are increased even more when equipped with the Akrapovic titanium silencer that ours had.

As we said before, at first glance what attracts attention are its dimensions. The bike is big, the tank is 23 l. it is bulky but narrow enough at the knees to carry it standing comfortably and the standard seat makes it quite a tall motorcycle, but the brand offers a wide repertoire of seats of different sizes almost personalized – we are talking about BMW –.

However, once started, the bike seems like yours for a lifetime. Those more accustomed to the 1200/1250, displacement apart, are struck by the different gravity of a smaller in-line engine, since the usual inertia of the boxer twin-cylinder translates here into a stability that combines very well with the dimensions of the Adventure, making changes of direction very fast, not only on the road, but also in the field.

In short, the 850 is perhaps the most versatile of the GS family. Versatile in its use both on and off road and versatile in the type of users, giving both the most accustomed and those who carry a few kilometers less on their backs, what each one demands of it. The companion is well received in all respects. It has handles and ample space on the seat.
Next : Which is Better, Jeep Wrangler or Pajero?
Morsun Brand
Categories
Information
Contact Us
Morsun 2012-2020 © All Rights Reserved.    POWERED BY UEESHOP
Email to Us Chat on Whatsapp
Chat on Wechat
Leave a message
Morsun Technology is one of the leading manufacturers of Jeep Wrangler led headlights in China.
More languages: Jeep Wrangler faros led | phares à led Jeep Wrangler | Jeep Wrangler führte Scheinwerfer | الصمام المصابيح الأمامية جيب رانجلر | Jeep Wrangler вёў фары | Faróis led Jeep Wrangler | Lampu depan Jeep Wrangler led