Views : 203
Update time : 2021-03-03 11:54:22
This is a typical American-style muscle truck, well-known in the United States. It is the overlord on the highway, a classic of American long-head trucks. In the movie "Transformers", the prototype of Optimus Prime is Peterbilt 379, so they are square Peterbilt 379 led headlights, but this is the next generation of 379: Peterbilt 389. 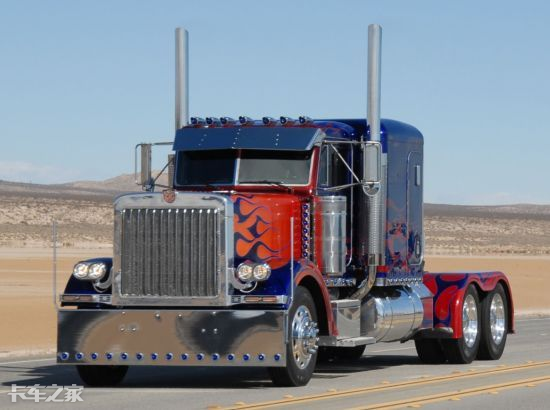 Peterbilt, along with Kenworth and Duff, belong to the American Pekka Group. The flagship brand of Pekka Group is Peterbilt and Kenworth. The combination of innovation and classic design has formed the most American-style representative of long-head heavy trucks.

From the appearance point of view, in the model of the 389 era, the long and big nose is its characteristic, and the appearance of the entire car is very obvious, as well as the edges and corners. Can make people feel full of "muscle" filling the body.

The shiny car paint and the bright and huge air intake grille are full of American flavor. Since its design in 1978, its appearance has changed slightly.

This more rounded combination headlight appeared for the first time in Peterbilt 389, combining the original split lamps in a lampshade. The high beam uses a halogen bulb and the low beam has a lens, which looks more beautiful and advanced.

There are strict restrictions on the modification of vehicles in China, and this car is currently not a vegan car. In order to increase the atmosphere of the performance and increase the effect of advertising, the organizer has pasted decals related to this event on the living cabin. The stickers do not exceed 20% of the body area, and they can still meet the legal norms.

There is a cabin door on the left side of the living cabin at the rear of the driver's cab, which opens to the position of the sleeping berth, which allows you to directly enter the car. A pair of airbags can be seen at the rear of the vehicle as a shock absorber, which absorbs road bumps and can provide a higher level of comfort in the cab.

The lower part of the co-pilot door has an "OK window", which can reduce the blind spot on the right side of the vehicle and ensure the safety of the vehicle even when driving on urban roads. The car mentioned in today's article, you wouldn't expect it to be parked in a lively place by the West Lake in Hangzhou to help out for a performance.

A small label on the side of the vehicle caught the author's attention, which translated means "certified cleaning device" using Cummins matching parts, which can infer that this Peterbilt uses Cummins engine.

For foreign modifications, there can also be many decorations on the wheels. The long wheel decorations are full of American flavor. If the refit still has shiny wheels, doesn't he have it? No, a very familiar icon can be found on the wheels: Alcoa. It's not that it doesn't shine, but wind and rain make it lose its luster.

Bridgestone 285/75 tires are used on the front wheels. This tire belongs to the "ECOPIA" series, which is quieter, fuel-efficient, wear-resistant and safer.

The battery box is installed in the lower part of the main driver's side and used as a pedal for getting on and off the car, achieving the purpose of saving space.

The blue lid marked "DEF" means diesel engine exhaust gas treatment fluid, which is what we call urea tank. In this way, this car carries an exhaust gas aftertreatment system that can adapt to higher emission standards. There is a fuel tank on the left and right sides of the chassis, which can provide the vehicle with long-distance fuel demand. If you want to be in the United States, it will only be an ordinary truck.

The stage is built so that the rear axle can only be hidden in it. Similar to the front axle, they are equipped with decorations such as hubcaps. The small "localized modification" of the turn signal on the fender improves safety, but it always looks a little awkward. The fenders with the Peterbilt logo are still there, and the originality of this car is still very high.
Previous : Jeep Wrangler Rubicon Unlimited Version with an Exposed Canvas Roof Next : Sergio Marchionne confirms 2018 Jeep Wrangler launch for November
Morsun Brand
Categories
Information
Contact Us
Morsun 2012-2020 © All Rights Reserved.    POWERED BY UEESHOP
Email to Us Chat on Whatsapp
Chat on Wechat
Leave a message
Morsun Technology is one of the leading manufacturers of Jeep Wrangler led headlights in China.
More languages: Jeep Wrangler faros led | phares à led Jeep Wrangler | Jeep Wrangler führte Scheinwerfer | الصمام المصابيح الأمامية جيب رانجلر | Jeep Wrangler вёў фары | Faróis led Jeep Wrangler | Lampu depan Jeep Wrangler led